Above, Jean-Carlos Casely of Berklee Online’s Class of 2018 is ready to rock. (PHOTO BY MARK TEIWES)
Less than a year ago, Jessica Saltz wouldn’t have imagined she would be marching across the stage in a cap and gown at Berklee College of Music in Boston, MA. That’s because up until December, she was certain she would receive her degree from McNally Smith College of Music in St. Paul, Minnesota. Then the unthinkable happened: On December 14, McNally Smith administrators sent out an email saying the college would “discontinue all course offerings at the end of this fall semester, 2017.”
Within two weeks of her school closing, Jessica was taking classes with Berklee Online.
“I was like, ‘you know what? Let’s get it done!’” she says. 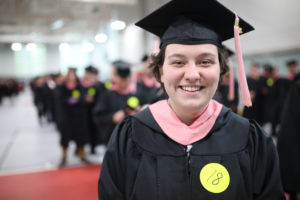 “I just want to go out there, and I want to get going. I want to do what I want to do, which I still can, but I think that this degree is what really makes me distinguished from everybody else.”
—Jessica Saltz, Berklee Online Class of 2018
(PHOTO BY MARK TEIWES)

And getting it done is exactly what she did. She was able to walk in Commencement earlier this month, and she will complete the 30 credits she needs for her degree in Composition this summer.
Berklee Online’s Class of 2018 is full of inspirational students like Jessica, many of whom also took unlikely paths to get here.
Mindy Wilson was a senior airman in the Air Force, who was medically discharged in 2001, after four years of service. She began DJing in Florida and started her own company, which she enjoyed for a number of years but was never able to make it into a full-time gig.
“I thought to myself, ‘Why in the world can’t I go to school for what I love?’” she remembers.
And when her mother passed away in 2015, she had an epiphany.
“I just found this motivation that I had never experienced before,” she says. “Come hell or high water, I was going to go to music school.” 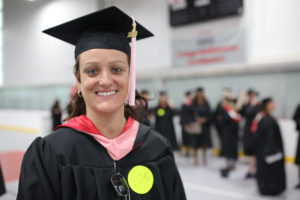 “I wanted to do music because that was my passion and I knew that I had something to offer, no matter where it was, no matter what I was doing. I just knew that I needed that education; that structured instruction, if you will.”
Mindy Wilson, Berklee Online Class of 2018
(PHOTO BY MARK TEIWES)

As a veteran, Mindy found out she was eligible for Vocational Rehabilitation and Employment benefits (also known as Chapter 31) and applied for assistance.  She says that graduating from Berklee Online has righted her course.
“It’s been the biggest blessing of my life, other than my child,” she says. “It was something that I needed for myself, not just for a sense of completion—getting your degree is one thing; it’s amazing—but the experience and the amounts of things that I’ve learned over the past two years is just incredible. It’s changed me so much as a musician, as an artist, as a producer. . . . I’m at the point now where I finally feel like I’m doing something right with my life and I’m on the right path.”
Will Jay is a member of the Class of 2018 who has been on the right path for a while, but he says his Berklee Online education is helping him blaze new trails he hadn’t considered before. In the music industry since he was 14, he was one-fifth of the group IM5, put together by Simon Fuller—the same Simon Fuller who put together the Spice Girls and created American Idol—and he felt he could better round out his performing and writing career by focusing on music business, and earning his Interdisciplinary Studies degree. 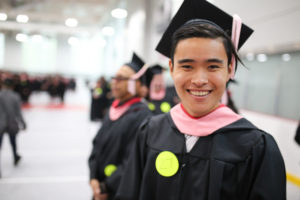 “I didn’t get a high school graduation. Because I was in my band, I took the GED to get out early. It was a really cool experience to have my parents, my grandparents, and my brother there to see me graduate.” —Will Jay, Berklee Online Class of 2018 (PHOTO BY MARK TEIWES)

“For me, it was important to learn about the business side of things, because you know you have to be a business person as an independent artist, which I am,” he says. “I learned a lot about the legal side of things, which will definitely help me moving forward. . . . To be honest, signing a contract at 14, I definitely didn’t really read it. I kind of relied on my parents as well as the lawyer we hired, who’s great. We didn’t get screwed over, thankfully, but a lot of people do.”
Music Business has traditionally been one of Berklee Online’s most popular areas of study, and in the Los Angeles apartment of Desanka Ilic and David Pinder, it’s also the most popular area of study. So much so that both members of the household— who also walked in the Berklee’s Commencement ceremony in Boston earlier this month—will be part of Berklee Online’s inaugural master’s cohort, hoping to earn their Master of Arts in Music Business in 2019. 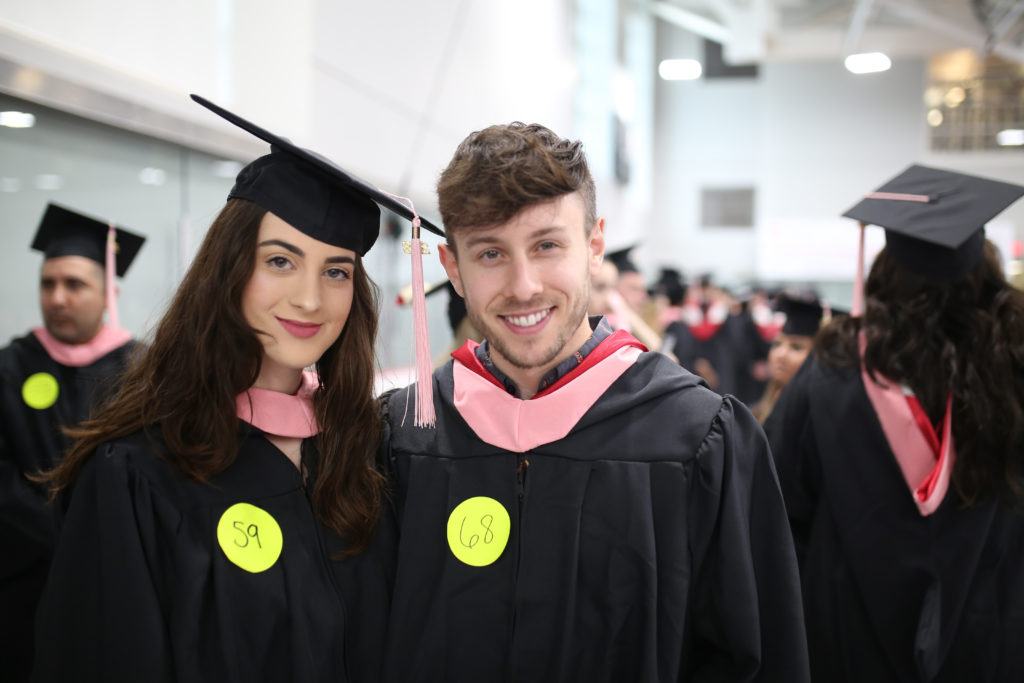 “It was really cool that we were able to kind of congregate in one place and everyone kind of had the same end goal but with different journeys.”
— Berklee Online Class of 2018 grad Desanka Ilic, pictured here with her boyfriend and classmate David Pinder
(PHOTO BY MARK TEIWES)

“We are so academically focused right now,” says Desanka. “We’re like, ‘might as well just keep the ball rolling and continue with the 12-month program.’ It’ll do nothing but good for us and give our business more credibility.”
The business is a PR and marketing firm called Cold Coffee Records, which she and David began right as they started at Berklee Online. She had previously been enrolled at Pepperdine University as a music major, but it wasn’t the right fit for her.
“I just felt that Berklee Online’s classes were so much more relevant to actual life than just doing classes to do classes,” she says. “They were so helpful in developing our business, and I felt that each homework assignment had meaning and had a greater purpose than just busywork.”
In addition to her own business, Desanka also has a singing and acting career, and has accomplished all of this at a young age.
“I’ll have my masters right when I turn 22,” she says, proudly.