Death is Real: Mount Eerie and the Art of Expressing ‘Emptiness’ through Songwriting

Is there anything more relatable for a songwriter than another songwriter writing about songwriting? The late Leonard Cohen famously sang “it goes like this the 4th, the 5th, the minor fall, the major lift,” addressing the chord structure of his beloved track “Hallelujah.” Jeff Tweedy made reference to only seeing “black and white, and white and pink with blades of blue, that lay between the words I think on a page” while struggling with writer’s block. Carly Simon undoubtedly put a knot in her subject’s throat when she sang “you probably think this song is about you” (as well as putting herself into meta-lyric history) in the cryptic chorus of “You’re So Vain.” For those who care for music, these little meta moments not only break the fourth wall, they serve as lessons from masters of the craft.

Experimental folk artist Phil Elverum, who releases music as Mount Eerie, served up some brilliant examples of breaking the fourth wall of songwriting this year as well. The latest Mount Eerie release, A Crow Looked At Me, details the immensely emotional timeline of Elverum’s wife, Genevieve, her cancer diagnosis, her passing, and how Phil and his daughter have processed loss. It’s 41 minutes and 30 seconds of true heartbreak, and because of this, the few instances of meta lyrics transcend clever, and become something else entirely. On the track “Emptiness Pt. 2,” Elverum sings, “conceptual emptiness was cool, back before I knew my way around these hospitals.” That line has not left my consciousness ever since I heard it, because I felt as though I immediately knew what he meant. 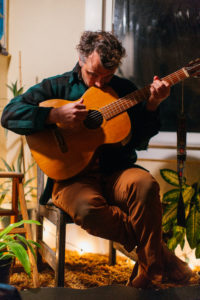 This line is in part a reference to a song the Elverum released previously called “Emptiness.” He’s following in what we could call the “Glass Onion” tradition, where the Beatles begin with the lyric that requires you to know a little bit about the band’s history, when John Lennon sings, “I told you about ‘Strawberry Fields.’” Elverum’s sequel is decidedly more serious. He is referencing that he had tried to channel this level of overwhelming loneliness previously, and even released it, but suggests that he wasn’t truly feeling that “Emptiness” at that point in time. He is calling himself out for just thinking the idea of feeling empty seemed intriguing, and that penning a lyric from that perspective would help him come across as a deeper songwriter.

As a songwriter, I’ve totally done this! Maybe I’m just trying to making myself feel better for admitting this, but I feel like this idea of conceptual emotions hits close to home for many songwriters. Even as I’m writing this I’m listening to Bright Eyes wondering, “why can’t I be as brooding as Conor Oberst?!” If you’re moved by an artist, and how successful they are at emoting through song, it makes sense to try to recreate that feeling. Right? Maybe I’m just trying to make myself feel better again?

On “Real Death,” another track from A Crow Looked At Me, Elverum pronounces that “death is real, someone’s there and then they’re not, and it’s not worth singing about, it’s not worth turning into art.”

It’s a line that seemingly contradicts itself, because he did in fact turn it into art, and in turn he captured a stage of grieving that’s often overlooked, a helpless feeling that everything is futile, when he sings “all poetry is dumb.” Nick Cave went through something similar while in the midst of recording his 2016 album Skeleton Tree, and his son died unexpectedly. He changed lyrics to make them less narrative, because he claimed he lost faith in that style of storytelling.

Ultimately, I believe Elverum decided that it was worth turning his experience into art because this time, he really felt this emptiness that he had only thought he had felt before. 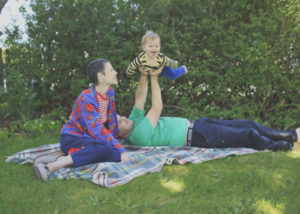 Phil Elverum is pictured here in happier times, hoisting up his daughter as his wife, Geneviève Castrée, looks on. Castrée died of pancreatic cancer. To learn more about the fight against pancreatic cancer, visit www.lustgarten.org.

He also seems to have discovered something about the human condition, learning that it’s a double-edged sword, when he ends with the line, “I don’t want to learn anything from this/I love you.” That emptiness was real, and it was tragic. Loss is lonely, and Elverum may realize that in his function as a songwriter and a human being that he could at least create a song cycle to comfort anyone who has gone through this, and let them know they aren’t alone. Losing his wife led him to do a lot of soul searching, and part of that journey involved analyzing his intentions as an artist.

While no one should have to suffer what Phil Elverum has been through, there is a lesson for all songwriters in the lyrics from A Crow Looked At Me: As songwriters we should analyze our own intentions and discover what’s true in our own voice.