Even though Mark Cross composed three pieces of music for the brand new Fifty Shades film, it’s unlikely that he and his wife will be sitting in the cinema on Valentine’s Day when the film officially opens.

“I would love to go on opening night but in the harsh light of reality, with small children, we’d have to get a babysitter,” says the composer, who graduated from Berklee College of Music in 1986, receiving two bachelor’s degrees; one in music production engineering and the other in music education. He’s currently a faculty professor at California State University Northridge and he teaches Music Production Analysis, Audio Post Production for Film & TV, and Pro Tools 101 at Berklee Online, in addition to the engineering and composition work he does.

The most that Cross has seen of any Fifty Shades franchise was the first hour of the first film when it was on HBO, shortly after he was offered the gig to compose source cues for the sequel. Cross took a call from Fifty Shades Darker director James Foley and the film’s music editor and music supervisors. Immediately after they emailed him a temporary clip of what they were looking for, he began composing: without viewing a single scene of the new film.

“I got the feeling that they just had so much on their plate that the quicker that I could get to the point and get off the phone, the happier they would be,” he says with a laugh, as he recalls the process.

He turned the piece around within a matter of hours, and the team was happy with his composition. So happy, in fact, that they offered him two more cues. He still doesn’t know for sure what is happening in the scenes he composed for, but he’s pretty sure it’s not the steamy fare that has given the Fifty Shades franchise its reputation. 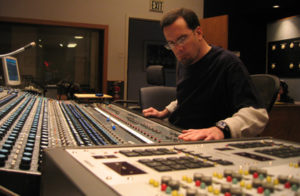 Mark Cross usually works on production and mixing for films, so the Fifty Shades gig was a big deal for him.

Cross speaks with a reverence and excitement about his involvement in Fifty Shades Darker that stands in stark contrast to the lack of information he has about it. Prior to getting the gig, he had been completing his master’s in music education from Boston University. He had mentioned to his wife—producer Megan Murphy, who was also getting her master’s at the same time—that because he was turning down opportunities while he was studying, he was worried that there would be none left when he finished his program.

“I was commenting to her, in the middle of the summer, that I was a little concerned about getting back in the saddle upon completion of our degrees,” he says, “it’s funny that you put that out into the universe, and then, boom! Literally a week or two after graduation I got an opportunity to work on a film and then this came kind of out of the blue and so I just got right back in, which was really cool and obviously I’m very happy about it.”

Many of Cross’ previous credits in film are for production and mixing, on movies such as Alien: Resurrection, Seabiscuit, and Cars. Most of Cross’ experience in composition is in TV, on shows such as Key and Peele, Curb Your Enthusiasm, and Last Comic Standing. He says getting this licensing opportunity for a movie is definitely more than just a boon for his resumé.

“TV licensing is typically low, unless you are the Rolling Stones,” he says. “I would say that licensing money for a feature film is easily ten times that of television.”

As far as when he’ll be able to find the time to see Fifty Shades Darker, he says “when the universe allows.”
“The subject matter of the shows that we’re on is too mature for us to really share with our children: They just kind of know that mommy and daddy work on movies and TV shows,” he says. “They’re more into their shows so they’re just kind of like, ‘Well, did you work on Teen Titans Go!?’ and I’m like, ‘No, I didn’t,’ so they’re like, ‘Okay, whatever.’”