When Luis Rivera arrived home in Puerto Rico after last weekend’s festivities in Boston, the first thing he did was to carefully place a newly purchased sticker on the back window of his car. The sticker reads: Berklee Alumni.

“It was a life-changing experience,” says Rivera, 31, of his experience at Berklee commencement, which was also his first visit to Berklee’s campus, after studying with Berklee Online for three years. He is a double-major, in Music Business and Electronic Music Production and Design.

“I also bought like five T-shirts and a teddy bear,” he reveals.
Rivera reflects on the early days of his college experience, in particular the Developing Your Artistry class.

“I remember crying a lot because of that class,” he says. “Because I started getting to know myself and my passions, and how Berklee and the professors helped me out through that. Each semester after that one I have grown and I have learned about myself. I have started to see things that I didn’t know about me in the beginning. The professors were there for us, and the way they did it, you could feel that they actually cared about us and about what we are doing and where we’re going.”

Rivera is part of the largest graduating class from Berklee Online: 62 students.

Hailing from 25 different states, a majority of the Berklee Online students who walked in the ceremony live in California. The ages of these graduates run the gamut.

Sydney Boodman is 21, and is completing her Interdisciplinary Music Studies degree. She’s one of the 17 students in California. 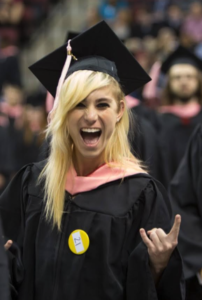 “I started Berklee Online right out of high school,” she says. “I was just looking for music colleges, and the main problem I was running into was that I was in California and I’d already started a career in California. I was already playing guitar, I was already writing music with people, performing and teaching guitar, and everything was in California and I didn’t want to leave, but all the best schools were out of state. Then I ended up just searching online one day: ‘What if they offer this online?’ I searched it and I saw Berklee pop up; it was the first thing I saw and I thought, ‘Am I being pranked? Is this a joke? Because this is unreal!’”

Boodman says that aside from its robust music program, being able to walk in the graduation ceremony was another major reason she chose to study with Berklee Online.

“I asked them, ‘Do I get to go to Boston and graduate with everyone else?’ and when they said yes, that made up my mind.”

Boodman says she’s hoping to begin a career in scoring music for films. Sitting at the ceremony last week helped her realize that she was ready.
“Once I received my diploma I was like, ‘I’m definitely qualified to do this now,’ so it was a reassurance that we have worked with the best teachers, we have been trained by the best, and we’re totally ready. I think a lot of people feel scared when they leave college, which is normal, but didn’t feel an ounce of that at that ceremony at all.”

Carla Hassett, who is graduating with a degree in Music Production, arrived in Los Angeles in the 1980s.

“Three days after I stepped foot here I was auditioning for Madonna,” she says. In a career that has included voicing the Rio movies, singing backup with Sergio Mendes and Billy Idol (that’s her up on the platform with the blond bangs in the video below), she doesn’t seem like she needs any musical guidance.

“I totally needed Berklee Online,” she says. “ And it really came at the right time. I was looking for the last 10 years. I ended a marriage a while ago and I found myself with no money, and very little work, and I had it in mind back then that I wanted to go back to school. But I just couldn’t figure out how to do it and not have to radically change my life. It had to be the right program. I didn’t want to go to UCLA to study Ethnomusicology. That wasn’t exciting to me. I wanted to do what I already do, but better.”

Producing music fit this criteria perfectly. She had worked with producers for years, but now it was her turn to call the shots.

“It feels like I’m finally where I’m supposed to be,” she says. “It feels so appropriate. You start getting older and it’s like not only do you not get called for certain gigs anymore, but you don’t want them anymore. It just doesn’t feel right. You feel overqualified and you start finding yourself wanting to roll your eyes sometimes. It’s not because there’s anything wrong with that gig, it’s because you don’t belong there anymore.  . . . But I feel like I’m defining my direction now, and defining my future, and who I am, and where I feel I can be useful.”

Many of the Berklee Online students who marched at commencement had interacted with each other online in the virtual classroom, but finally got to meet in-person last weekend. Hassett speaks fondly of her classmate Anya Nebel, a 51-year-old, graduating with a degree in Electronic Music Production and Sound Design.

When we reach Nebel by phone, the first thing she says is, “One second, I’m on the other line with one of my classmates. Hold on.” 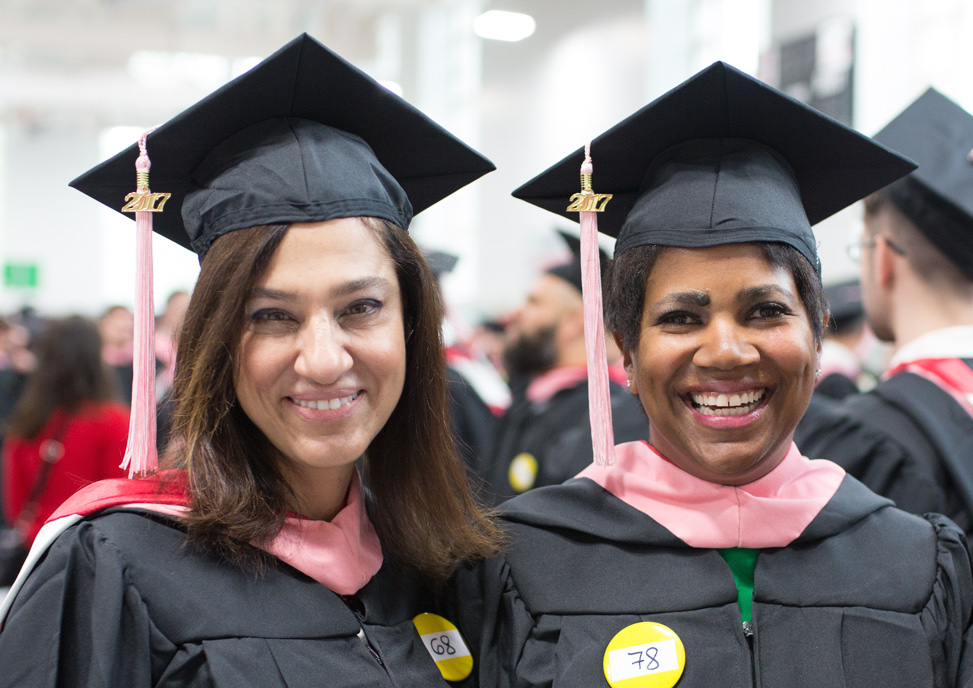 Nebel was a professional actress for 30 years, and sang at Carnegie Hall twice, but she looks at the degree from Berklee Online as a new chapter: a chance to start a career in electronic dance music.

“My dream, or where I really excelled, was in the EDM classes,” she says. “I really want to do EDM and possibly take old school and make it new school. I’m going to play with classical music and try to make some EDM out of that because I don’t have to pay for it. It’s public domain!”

Master Sergeant Jonathan McPherson began his career at Berklee College of Music in 1999. While he was in the Army, his platoon sergeant, a Berklee alum, told him about his experience at the music school.

“I knew at the time I wasn’t going to reenlist in the Army, and even after talking to him my dream became to get into Berklee College of Music,” he says.

His dream came true at the turn of the century, but after a semester in Boston, he saw the opportunity to audition for the Air Force band. He got the gig and left school, but Master Sergeant McPherson always wanted to finish his music degree.
“I was so excited when Berklee Online opened degree programs up. I was able to roll in prior credits from my semester at Berklee, but it offered me the flexibility for me to earn my degree at a pace that was quite manageable while holding this full-time job in the Air Force band.”

And the job is definitely full-time. As the musical director and keyboard player of a six-piece group that goes by the name of Max Impact, he performed 53 missions in five nations (Qatar, UAE, Egypt, Jordan, and UAE) in the span of three months.

Master Sergeant McPherson says that although walking in the commencement ceremony represented the completion of a long-term goal, it also represented a launch pad for a new phase in his career.

“I want to continue to serve in the Air Force band for about three to five more years, but in the meantime I want to continue networking with the Berklee community, and to collaborate on music projects, and basically I just want to keep learning as much as possible, from students, faculties, alumni, even the colleagues that I work with in the band. I think that’s a very important aspect of being a good musician. The learning doesn’t stop just because I earned a degree.”

Berklee Online Graduates: What Did They Study, Where Are They From? 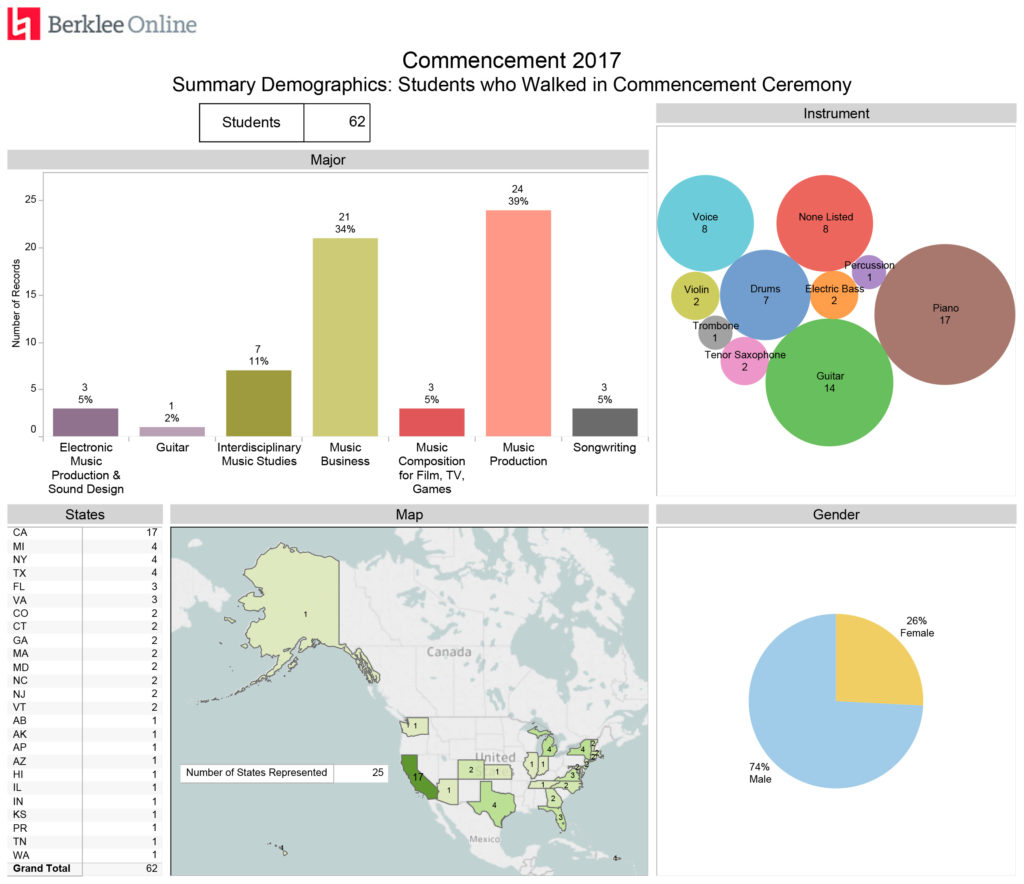